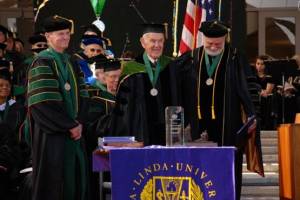 G. Gordon Hadley, MD, Dean Emeritus and Professor in the Department of Pathology and Human Anatomy, passed away today at 2:40 p.m., at the age of 91.

Among Dr. Hadley’s numerous awards are:

The following is a copy of the biography printed in the graduation program for the 2011 Commencement Ceremony:

During the more than six decades since Dr. G. Gordon Hadley completed his medical education, he has lived his life with a sense of mission reflected in service. His contributions to Loma Linda University have been rivaled only by the rich variety of his global service to the Seventh-day Adventist Church.

Dr. Hadley was introduced to service perspectives early in his childhood. Growing up in Washington, DC, he observed this value modeled not only by his parents in their home, but also in his physician father’s selfless ministry to society’s underprivileged; and what he saw made a profound, lifelong impression. More than anything, he wanted to become a physician.

Dr. Hadley’s graduation from the College of Medical Evangelists (CME, renamed Loma Linda University in 1961) as a member of the class of 1944-B was preceded by the bombing of Pearl Harbor, modification of the medical school curriculum to ensure early completion of his class, and an abbreviated internship. He subsequently was drafted and assigned to the 138th Evacuation Hospital, which served the 15th Army in Europe. Following his discharge from the military in 1946, he completed a three-year residency in pathology at CME (one of the first four physicians to enroll in this residency), then moved to the “city division”––as the Los Angeles Campus of CME was then known––to join the medical school teaching staff.

From 1949 until Loma Linda University (LLU) consolidated its two campuses in 1962, Dr. Hadley taught not only at CME/LLU; but also on church mission assignments at medical colleges in Vellore, India (1955-1958), and on multiple occasions in Kabul and Jalalabad, Afghanistan.

For nearly ten years beginning in 1977, Dr. Hadley served as dean of LLU School of Medicine. In 1986, he accepted an invitation to become director of the General Conference Health and Temperance Department, where he served until 1991. Upon his return to the medical faculty at LLU, Dr. Hadley fulfilled a request made in 1990 by Dr. B. Lyn Behrens, then dean of the School of Medicine, that he serve as a mentor for the class of 1994. In his role as student physician, he reported his experiences to the Curriculum Committee.

In 1994, Dr. Hadley responded affirmatively to a request that he assume leadership of a new medical facility in Hangzhou, China––Sir Run Run Shaw Hospital (SRRSH). Shortly after its opening, he became chief executive officer––a position he held until 2001. Thanks in large part to the pioneering role he played, SRRSH today enjoys a reputation as one of the premier hospitals in Asia.

In 2001, when the decision was made that Kabul Medical Institute would rebuild its curriculum––which, like the country, had been devastated by the ravages of two decades of war––school officials turned once more to Dr. Hadley, who for forty years had helped anchor the global outreach of Loma Linda University in this region. In response to yet another opportunity to serve, Dr. Hadley prepared to relocate with his wife, Alphie (Alice Ruth Wagner Hadley), to Kabul no later than early autumn. Although these plans were delayed after the events of September 11, Dr. Hadley did return for some months and continued to exert an influence on the region through his legacy of former students who now hold positions of influence in the government and in NGOs and other health-related endeavors.

Still discovering new ways to serve Loma Linda University School of Medicine, Dr. Hadley mentored pathology students. In addition, he placed on DVDs photographs he had taken of students’ museum specimens, an invaluable asset to the study of pathology.

In recognition of his contributions not only to this academic and health care community, but also to the broader community of the world church, Dr. G. Gordon Hadley received the Loma Linda University Adventist Health Sciences Center Lifetime Service Award at the Conferring of Degrees for the School of Medicine.

Time and location of memorial services are yet to be announced.

If you have a moment, please share your memories of Dr. Gordon Hadley by replying to this email (smreport@llu.edu).

Submit Your Announcement
Please email smreport@llu.edu to suggest any information to be included regarding your department. Submissions are subject to approval by the Dean and must be 100 words or less and include contact information.